A downloadable game for Windows

I made this game back in 2003 as part of a RetroRemakes.org competition. The challenge - as always - was to remake an old game. I chose the Mac classic Crystal Quest, which had been remade for DOS, but even that was old in 2003.

I have long-since lost the source code, and thought I had lost the game entirely, but thankfully RetroRemakes.org still has copies of all their own competition submissions, and I was able to find Crystalis.

The game still runs great; the only issue I noticed was that the credits and high score table scroll VERY QUICKLY, making them hard to read.

All sounds were created by my friend Katie and I. We sampled our voice, the sound of flicking soda cans, and other things, then I did some basic processing. If you can find and play the original Crystal Quest, I suspect its creator - Patrick Buckland - did something rather similar :P (THOSE WERE THE DAYS.)

I'd like to take the opportunity to thank Katie, who's been helping me make games ever since! 12 years later, she's provided her voice for my latest project, Mysterious Space (also available here on itch.io, as well as on Steam!) She has been a most-awesome friend over the years :)

A million thanks to Patrick Buckland, as well, for creating the original Crystal Quest, which I discovered and played on my dad's friend's Mac classic when I was a kid. Great games are great forever!

* Move with the mouse. The controls are true to the original game; you will hate them, and die a lot until you get used to them. Sorry.

* Fire with the left mouse button.

* Use a smart bomb with the right mouse button. 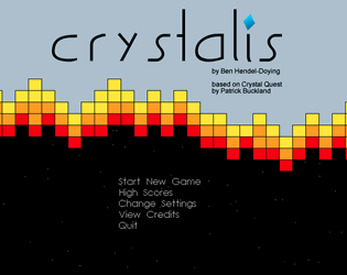