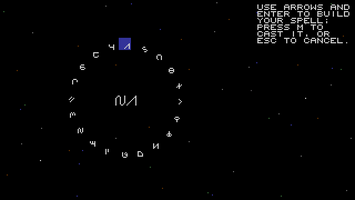 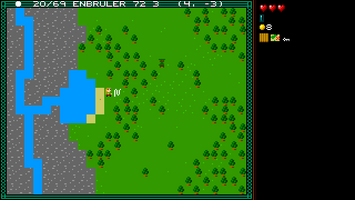 a long time ago - in the DOS days - I played a first-person RPG called Yendorian Tales. besides just being a really fun game (at the time; I have not replayed it recently, and cannot say whether or not it has held up over the years...), it had a pair of spells which I have NEVER forgotten: Mark, and Return.

when you cast Mark, you placed a mark where you were. you could only have one mark out at a time - recasting the spell replaced the old mark - but the marks otherwise lasted forever. when you cast Return, you were teleported to your mark.

it was a useful spell in general, but I think the reason I STILL have not forgotten this spell is that I discovered - on my own - that it could be used to circumvent the game's demo limitations!

the demo was actually very generous: you could play a long time before reaching a point where - sometime after taking a portal to a new land - the game popped up a message and said "hey, you have to pay for the full game!" and then kicked you back to starting area, and permanently closed the portal to the rest of the game.

I assume the intention here was to let you preview the next area of the game for a little bit, to get a taste of what was there.

HOWEVER - and perhaps you've figured this out yourself just now - I realized that if you left a Mark in that second area, then you could teleport back to it using Return, even after the game kicked you back to the starting area!

this is kind of unfortunate for the developers of Yendorian Tales, but it's also a fantastic (though accidental) expression of what open world games are about: you're given various tools, and presented various problems, and it's on you to think about those problems, and the tools at hand, in order to come up with a solution. when you DO come up with those solutions, the memories can be strong enough to stick with you for decades!

will LOOT × LORE × LOVE be able to have such a strong impression on you? goodness, that would be awfully nice; I'd be honored if it did! it's something I'll be thinking of as I develop the game, for sure... at the very least, Mark and Return are among the first spells I have coded for LOOT × LORE × LOVE, and I have a couple ideas for things that would give them seemingly game-breaking uses...