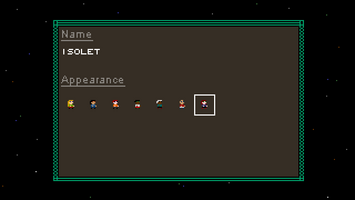 I've been doing a TON of rough mapping (rough, in that grass details, etc, are not yet in... though I'm thinking my time might be better-spent proc-genning that, but that's a conversation for another time!) ... where was I?

ah yes: rough mapping. but also: polishing up some other parts of the game.

first image here shows a map that the game exported. previously, the map exporter only operated on z-level 0, and could only produce full-size images. I've now added options that allow me to export any z-level, and at either 1/8, 1/4, 1/2, or full size. so this is an image of z-index 1 (which is BELOW ground for silly reasons that aren't important enough to change), and at 1/4 size.

importantly, you can see that I still have not finished the first dungeon, but I've started on a second (icy, snow-flake-shaped) dungeon!

second image shows a first-draft "character creation" screen. previously (and you can see this in the demo), the game just booted you straight into the game. now there's a title menu (not shown) which takes heavy inspiration from early Zelda games, and this character creation screen where you can name yourself, and choose an appearance. this is all leading up to saving and loading the game, which is a feature that is of increasing importance as the world grows larger.

finally - and perhaps least-interestingly - we have a picture of the game's log file. I was going to do a plain text log, because that would make the most sense, but I was feeling bored, and decided to go for an HTML logger. I could also implement a plain text logger, but that sounds boring. what MAY be interesting about this - if you are also a programmer - is that the HTML logger is part of my "BMGFramework", which is a separate, open-source library I've been developing, and which is used by LOOT × LORE × LOVE to handle game states, drawing, collision detection, and some other things. it's a library I've been developing for many years (Mysterious Space also uses a version of it), however it's something that was previously copy-pasted from one project to another; only recently have I finally splintered it off into its own, truly-reusable project.

there's currently no documentation, and I can't promise that it's easy to understand, or even appropriate for the game YOU want to make, but it is available online, if you're curious, and will continue to be updated as I work on LOOT × LORE × LOVE; you can find it here: https://github.com/BenMakesGames/BMGFramework